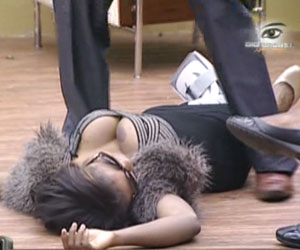 Karen, Lomwe and Luclay took Amplified TV to another level on Luclay’s Game Show, Mega Booster, where the two won US$100 000 each.

The two were excited when Luclay told them that they had just snatched this mega prize and a brand new house each.

Karen was the first contestant. Once she had won, the show went on with Karen acting hysterical and insisting in marrying the presenter and the adjudicator on set as she cried a river in excitement.

A calmer Lomwe followed and he too was very excited about his win and was certain that he would give his ex-wife US$1 then send her a card “Wish You Were Here” from Barbados.

This Show came after Wendall’s “Amazing Nibbles Show” where he interviewed Karen on her time on the legendary Big Brother Amplified. Karen was a bit embarrassed when Wendall asked her about her love interest in the House.

Meanwhile, Hanni’s Talk Show where she interviewed Vina, Vimbai, Millicent and Kim on the essence of beauty and what makes one beautiful.

Amplified TV was on point but all shall be revealed later tonight during the Task Presentation where Biggie shall make the final decision on whether the 100 percent Wager was worth it or not.

Stay tuned to DStv Channel 198 tonight at 19:00 CAT to see if the Amplified Housemates will impress Big Brother.

This week you get to save Wendall, Lomwe, Vimbai, Millicent, Hanni, Kim and Luclay. Vote now to save your favourite Housemates. Click Here to do so! Let your voice be heard!