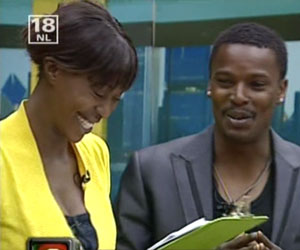 Just as Millicent planned it, Luclay seems to be warming up to her advances as they have been seen exchanging saucy massages all week.

The two were also co-hosts of Amplified TV’s news bulletin. They spoke a lot and laughed at each other’s jokes throughout the day.

Oblivious to the fact that Millicent has made him her project for the week, Luclay kept showering her with compliments as he stroked her bare back on Tuesday night. “You’ve got a beautiful back,” he whispered while Millicent moaned back in ‘appreciation’.
During Monday’s Chat Room session, Millicent vowed to make sure that Luclay eats from her palm by the end of the week. She told Biggie that she wanted to force him out of his shell by teasing and seducing him until he melts.

The girl knows how to seduce a guy…she did the pampering first and then left the rest to the South African Housemate to finish off. She told Biggie that once she was comfortable, she would give Luclay a random kiss and pretend as though it was a mistake then leave him to bury himself in his guilt.

Apparently Luclay has a girlfriend outside but hey, Millicent will not be the only woman that he’s been kinky with in the House if at all it will even get there. Weza got a fair share of loving from the guy and the two spend quite a few laughter-filled nights cuddling and doing things that lovers do.

However, it could be that Millicent’s ploy is in accordance with her longstanding beef with Weza, which they both claimed to have put behind them.

So, now that Weza is gone, Milli decided to pounce on Luclay and so far she is succeeding. At the rate that things are going, it seems as if it won’t be long before Africa witnesses that kiss.