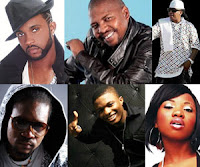 The Big Brother Amplified Finale will live up to its standards by uniting five African Award winning acts during the two hour Live Show on Sunday 31 July at 19:00 CAT.

CPwaa aka “The King of BongoCrunk” currently has a new hit called “Action” featuring Ms. Triniti, Dully Sykes and Mangwear. The song and video won Cpwaa 2 awards this year, Best Ragga/Dancehall song and Best Video of the year, on the Kilimanjaro Tanzania Music Awards.
Naija’s Hip Hop princess, Mo’Cheddah released her first solo video for her debut single, “If You Want Me” in 2010 and her video received rave reviews.

Wiz Kid officially broke into the industry in 2010 after releasing the smash hit singles ‘Holla At Your Boy,’ ‘Tease Me,’ and ‘Don’t Dull.’ He released his debut album ‘Superstar’ in 2011, and performed his sold out concert in June.

In 2007, Fally Ipupa won the Best Male Artist Cesaire Award and Best Artist or Group from Central Africa in the continental Kora Awards. In 2009, his album Arsenal de Belles Mélodies received much media attention and rave reviews, with hits like Chaise Electrique, a duet performed with Olivia from the group G-Unit.

Kalawa’s Speedy and Professor’s hit single; “Lento” has taken Africa by storm. The fusion of these two artists with vast experience in the Music industry produced nothing but magic. Professor has featured on popular award winning albums from artists such as Big Nuz, Trompies, Oskido, Thebe, Spikiri and Alaska. Speedy on the other hand was a member of the popular group, Bongo Maffin.

With such an electric lineup, the Finale is set to keep Africa glued to their screens as they wait to see who will walk away with the ultimate prize of US$200 000.