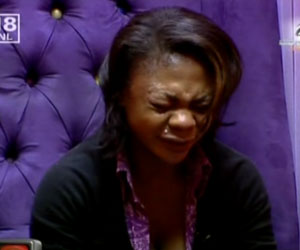 An emotional Karen sobbed uncontrollably during her Chat Room Session as she spoke about Bernadina, Mumba and Zeus’ Eviction.

She told Biggie that her heart was very heavy adding that if she could, she would have taken the bullet for Bernadina and Mumba. She said the two girls had made a great impact on her life.

However, Biggie decided to cut her Chat Room Session short as her emotions were all over the place and she could hardly speak.
Kim highlighted that she felt as though Lomwe was trying to use her to bring himself out but she had already realised that.

Meanwhile, Sharon O’s beef was with some countries that still have two representatives in the House.

She added that Nigeria was a big threat and thought that it was unfair that the country still had two Housemates.

An interesting twist came from Millicent who said she was out to tease Luclay until he came out of his shell this week.
She said she would ‘seduce’ him and give him a random kiss unexpectedly then leave him to die in his own guilt while thinking of his girlfriend back home.

What did Africa think about Karen’s outburst in the Chat Room? Was it real or is it just an act to try and win the hearts of Africa?